US Dollar Debasement – The Case for Gold As Future Money

Hyperinflation of the US dollar is here. We are now at 2.12 government spending in relation to tax revenue and the gold standard is here to save us yet again.

Figure 1 shows the increase in prices from the Friday before the Fed announced it’s all-in support for the US economy with quantitative easing. This quickly became a commitment to hyper inflate the money supply if and when needed. Nearly every price you are seeing in the Figure below was declining prior to the zero fund rate established by the Fed on March 16, 2020. 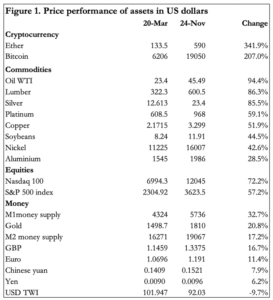 Following late-March every category above has seen an increase in price. While it can be argued individually a reason for each single category and commodity’s raise, the inherent truth is seen in the fall of every fiat currency listed in the table above. The harsh reality is this cannot happen without the dollar (and these other currencies) losing purchasing power.

Figure 1 is far from exhaustive yet shows the clear trend of substantial raises in precious metals on the back of the expansion of money supply. This is why many people are flocking to Gold & Silver to protect and grow their wealth in the face of the US dollar debasement.

The relationship between money and prices

There is often a time lag between the expansion of money quantity in the market and its effect on prices. However, there is a gross lack of distinction between existing and new circulating currency at this time which conceals this well.

Even if the distribution of money is obvious and in plain sight of the population, the public fails to understand the long term consequences of further diluting the dollar. What appears to be a rise in prices is inherently monetary debasement.

Upon the announcement from the Fed of their plans to inflate limitlessly only two categories of actors understood the inflation message. The first was the precious metals community and the second was the Chinese government which accelerated its purchase of commodities.

Hyperinflation of the dollar is here

It is now impossible to imagine a scenario where the US Government and the Fed would limit further monetary expansions. Their Keynesian creed tells them it would mean disastrous for the economy and their fiat currency. They have also failed to realize monetary inflation impoverishes the product capacity of the economy and transfers the wealth to a generally non-productive government sector.

Figure 2 above shows US government’s spending, following the Fed’s decision to implement limitless QE, has skyrocketed to a whopping 2.12 times tax revenue. And with the second Covid wave beginning, we are likely to see another fall in tax revenues and a second stimulus package in the works.

A realization of the economic effects of the virus is likely to last far beyond the virus itself. With hyperinflation here, we are now seeing the US Treasury bond market’s steep decline, a telltale sign. 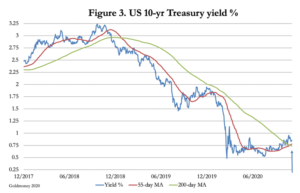 The case for gold as future money

Metallic money, gold, silver and the like, have always been the default populations fall back on when historic fiat currencies have failed. When kings, emperors and governments fail to sustain their unbacked alternatives, the gold-standard returns every time.

In figure 1, you can see silver is not currently being priced as monetary value. It is included in the commodity category and pried as an industrial metal which is one reason many are flocking to silver for protection, preparation and profit. Gold is now currently considered the ultimate money, while silver remains priced for industrial metal. However, silver saves the day the moment government money can no longer be trusted or valued, a time which is rapidly approaching.

If governments are to stop the fall of their fiat currencies, the only way to do this is by mobilizing their central bank gold reserves to back them. Those who advocate for cryptocurrencies have yet to explain how governments will sanction these as money since they have none in their monetary reserves. The only way for this to happen would be for fiat currencies to continue to exist which is a historic and logical impossibility.

The collapse in the purchasing power of fiat money allows us to rank stores of wealth. The best way has always been through gold and other reputable currencies such as silver and precious metals. The purchasing power of gold rises to reflect its scarcity in relation to the capital and consumer goods in the hands of distressed sellers who simultaneously will reject the governments currency.

Society under a gold standard enables its users to accumulate wealth. This is due to the government being generally unproductive by virtue of its bureaucracy and monopoly having to discard inflationism. The government will then become fully exposed with their absence of source funding and the inability of tax burden to sufficiently replace it.

Where will your wealth be stored the day the US dollar collapses for good? Ours is in silver, gold and other precious metals. Contact us for more information and to get your wealth out of the hands of the frivolous and destructive government.